Panik in Platform Peril - A Little Too Old-school 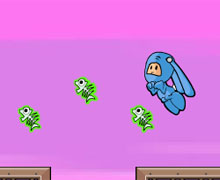 Panik is an old-school platformer that may, in fact, be a little too old-school for its own good. There are a lot of things about this game that deserve a positive nod: the graphics are nice and professional looking, the game engine runs well, there are hardly any bugs to speak of, and there are a decent variety of enemies and obstacles to avoid.

The main problem with this game is that the core game play is severely lacking. The authors seem to have missed all of the improvements to the platforming genre that have occurred over the last 20 years. Panik doesn't have fast-moving levels that require momentum and use of contraptions to send you flying all over the level like in a Sonic game. The game is quite slow, in fact, makes no use of momentum whatsoever, and lacks even the basic spring-in-the-ground that has become a staple of platformers ever since Sonic 1.

Neither does Panik have puzzle-like levels that require creative use of different abilities to complete, like a Mario game. Indeed, Panik has only two abilities: jump (not double-jump, mind you, just jump) and throw a ball. The ball doesn't even have the salutary effect of dispatching enemies--it merely freezes them for a few seconds. Nor does the time-freezing ball seem to impact the obstacles--it affects enemies only. It is, essentially, highly ineffectual gun. I'd take Mario's head stomp or Sonic's rolling into a spiky ball over this thing any day of the week.

Panik might have been worth playing anyway, had the author dragged us in with an interesting storyline. The titular hero is a man dressed in a giant bunny suit who puts his hands together in front of him when he jumps, like a rabbit. He is armed with a futuristic time-freezing sphere and must traverse a series of dangerous obstacle courses, avoiding death. We are told that he is in this situation because "there's a new obstacle course in town and Panik wants to play!" Not exactly a thrilling explanation. Is this a government-sponsored obstacle course to make people test out a new time-freezing weapon? Is Panik just a weirdo, or is there some reason for the bunny suit? We are never told.

The bottom line: this is an okay but uninspired game that will amuse you for a few minutes.