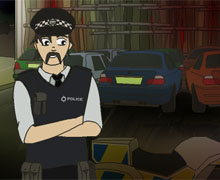 This is one of the best Super Flash Brothers games around, with beautiful graphics, tons of well-written dialog, and great, creepy music that does an excellent job setting the mood. Unfortunately, it's short, extremely easy, and provides little in terms of replay value.

The premise behind this game is that a carnival worker has turned up dead, and it's your job to collect clues, interview the various employees, and determine who the culprit is. You do this by talking to a variety of characters around the fairgrounds, as well as through mini-games and simple point-and-click investigation of your surroundings.

The Super Flash Brothers spent half a year making this game, and it shows in the game's quality and high production values. Unfortunately, this long development time did not translate into a long or particularly challenging game. Partly that's a problem of the genre, but it's also due to poor design decisions by the game's creators.

Generally, the idea behind whodunnit games like this is that you have to weigh the credibility of the various suspects in order to determine who the real culprit is. This involves a long and involved process of piecing together clues that confirm or contradict their stories, as well as picking up on cues about how the characters respond to you. This is at the heart of every good detective game, and since many of the characters seem suspicious right up until the end, it keeps the tension high.

Detective Grimoire, for some reason, shortcuts this process of cracking the case using the player's own deductive skills and instead substitutes an extremely easy and simplistic mini-game known as the "eye game." You simply give a character a harsh look when the game tells you they're lying to you, and they'll offer you an alibi. The game then tells you whether they're innocent or not.

Because the game does all the work for you once you've found all the clues you're supposed to find, it takes very little effort to beat Detective Grimoire. For my part, I beat the game in an hour flat. What's more, the culprit is always the same, so once you've won, there's no reason to play it again (unless you just want to enjoy the well-crafted story, beautiful graphics, and clever dialogue).

The bottom line: Detective Grimoire is well-made and a lot of fun. If you haven't played Detective Grimoire yet and you like detective games, you owe it to yourself to play this at least once. Just don't expect it to be a very long or challenging experience.